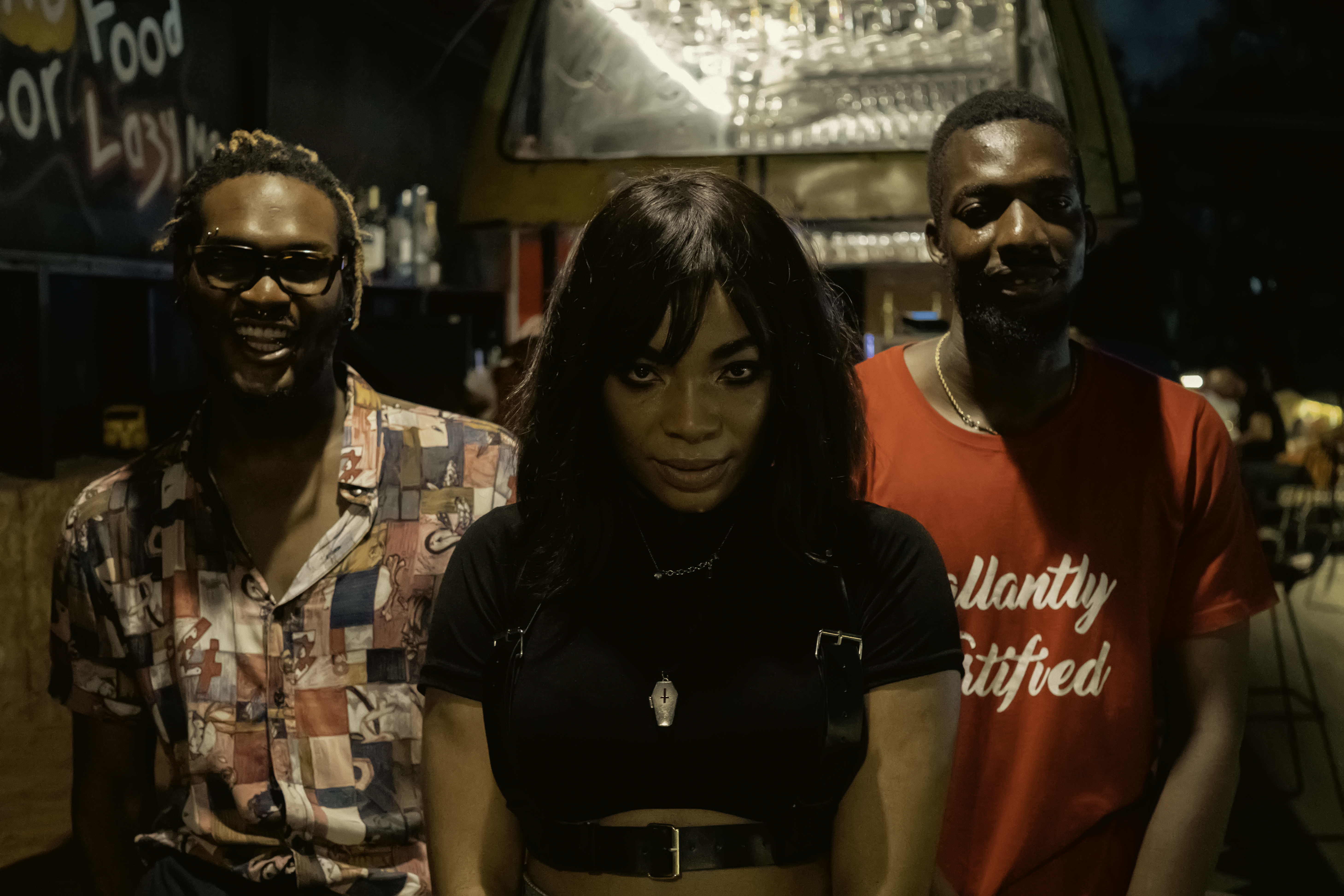 In 2013, Bianca Okorocha, a Nigerian artist who performs as ClayRocksU, received a DM from one of his Twitter followers. It was an invitation to Metal and Romance, a night out in Lagos focusing on rock music – a genre long plagued by negative stereotypes in Nigeria. When she arrived, she couldn’t believe her eyes: a whole community of rock fans. “It was one of the happiest times of my life,” she recalls.

Okorocha grew up listening to his father’s rock records, mostly from foreign bands. During her teenage years and early adulthood, she immersed herself in punk fashion. But she noticed that people were still suspicious of her. “At church, I was always called to the pastor’s office with some complaint or the other,” she says. “People have always looked at me sideways and refused to approach me, so I didn’t expect to see so many people in tune with rock music.

During Metal and Romance, she was shocked to hear Danjuma, the lead singer of the metal band 1 last autograph, growling – something she had never seen a Nigerian do. “When I saw them play, I was like, ‘No way am I not collaborating with these guys,'” she says. She would later become friends with Danjuma, and would play and release music with 1 Last Autograph, including the metal single “Down” in 2014. These days they still play together wherever there is rock music in Lagos and elsewhere in the country.

And they aren’t the only artists leading a new wave of Nigerian rock. For the love of woman and country, the last album by Oma Mahmud from Lagos, features both Afrobeats and punk-rock songs, as well as songs that mix the two genres. “There are a lot of people who really want to listen [rock] songs like this,” Mahmud says. “Whenever I play my music, it’s usually one of the highlights of the night. Especially because most of the rock songs are about people just venting their frustrations and living in Nigeria, [it’s] a country where almost everyone is frustrated. His music speaks to everyday problems in Nigeria, such as corruption, bad government and a failing economy. Mahmud’s energetic performances allow his audience to feel connected to his music. “They immediately latch onto the music and feel like I’m their best friend,” he says, “like I’m telling their story.”

With artists like Burna Boy sell Madison Square Garden and Wizkid and Davido doing the same at the 02 Arena, Nigerian music has become part of the western pop mainstream. Could Nigerian rock be the next breakout sound? Okorocha thinks so. “If we can combine the rock we love with Afrobeats, it can go a long way,” she says.

While rock music is often aligned with nonconformity and resistance, in a hyper-religious society like Nigeria, gender is also referred to as evil – or even associated with the occult. “Most people just think rock fans are listening to something demonic,” says Deoye Falade, who started listening to rock and metal in the mid-90s and now attends rock festivals and meetups. in Lagos. “The sweetest reactions I often get is that it’s noise.” But, he says, he doesn’t care anymore. “When you like something and you understand it, you appreciate it.”

He remembers a video of a Trending Nigerian wedding on Twitter in 2018, which featured the pair and their guests headbanging to System of a Down’s “Toxicity.” Some viewers did not understand why Nigerians were partying rock while dressed in agbada. “But you don’t have to paint your faces or rock fashion before you love rock music,” says Falade.

A 26-year-old Lagos-based graphic designer who goes by the name Queen, who has loved punk and metal since she was 13, says she felt rejected by her peers for listening to the music of her favorite bands Bring Me the Horizon and Asking Alexandria. “People were wary of talking to me and I had trouble making friends,” she recalls. “Once I started swaying and nodding my housemates were saying ‘the spirit’ had possessed me, which is weird because even the Christian music they were listening to was pretty much from the rock music – just a softer kind.”

But rock music hasn’t always been seen that way in Nigeria. In the 1970s, after the Nigerian Civil Warand while the country knew an economic boom fueled by the discovery of crude oil, rock bands like Ofo and the Black Company, Warhead Constrictionthe hykkersthe Funkeesand the Lijadu sisters graced the airwaves with psychedelic rock and funk that captured a typical nigerian sound. These artists chronicled the evils of civil war, and Nigerians have reveled in a surge of optimism that has spurred the growth of the national music industry. But the remaining war traumas and unresolved tensions have been swept under the rug – along with Nigerian rock.

Music historian and researcher Uchenna Ikonne, who edited the two-volume compilation Wake up! The Rise and Fall of Nigerian Rock 1972-1977, says rock’s appeal to young people in Nigeria – which sets it apart from the then more popular genre of juju – ultimately hurt the genre. “In Nigeria, [young people] have the least disposable income, compared to the West where teenagers have jobs and can spend money on entertainment, buying records and supporting artists,” he explains. “Teenagers [have never really had] jobs in Nigeria, and those who do do so to help support their families. Rock music therefore had a niche culture that struggled to sustain itself, unlike juju artists like King Sunny Ade and Ebenezer Obey who made whole albums praising the wealthiest aristocrats in society. These social elites would in turn attend their performances and cover these musicians with their money. … So while juju artists were making money, rock artists were struggling.

Ikonne also draws distinctions between Nigerian rock artists and the country’s most recognizable musical icon, Fela Kuti. For one thing, Fela Kuti’s Afrobeat sound shares stylistic similarities with Nigerian rock: percussive beats and grungy electric guitar and organ work. (Compare the solos in “Ije Udo,” a track by Nigerian 70s rockers Magnificent Zenians, for example, featuring Fela Kuti’s “Shakara”.) But, says Ikonne, “Coming from a middle-class background, Fela was able to circumvent the struggles of rock artists at the time, because he had more resources.” Ultimately, his experimentation with afrobeat, highlife and rock, coupled with his larger-than-life personality, garnered more attention than his rock peers. “When [Fela] perfected his sound, he sort of eclipsed and cannibalized the Nigerian rock scene,” says Ikonne.

From the 80s, a time that saw a growth of Christian revivalism in Nigeria, heavily influenced by the Moral Majority movement in the United States, rock music gained a bad reputation in the country. These prejudices have persisted for decades. Even in the 2000s Dammy Lawal, who grew up listening to foreign rock artists and later founded the Metal and Romance festival, was criticized for his taste in music. “Most of what I heard was that it was the devil’s music,” he recalls.

In 2013, Lawal created a BlackBerry Messenger group where he and his friends could share rock playlists. “We had people sharing songs from Disturbed to Linkin Park, AC/DC to Creed, and so much more,” Lawal says.

The collective grew and moved to WhatsApp. As each group reached their membership limits on the app, new offshoots were formed: RockazWorld, Rock Republik, Rock Haven. Eventually, Dammy decided to host an in-person event: Metal and Romance, where he also met ClayRocksU. “It was supposed to be a get-together to share music playlists and dance to our favorite songs, but the following year the members started demanding that we include performances,” he says. “That’s when we knew we had to put on a real show with a bigger venue. We were onto something.

In October 2015, Rocktober Fest was born. Rock bands and artists came from all over Africa to watch the show. Over 700 tickets were sold and 15 artists delighted fans. The numbers grew exponentially over the next two years.

Lawal believes African rock artists need to embrace their culture, rather than simply imitate Western sounds. “The best rock songs are the ones with a local flavor,” he says.

Oma Mahmud agrees, saying Nigerian rock artists need to make rock music “native” to the country. “I can perform regular punk-rock songs, but I know who I expect to listen to,” he says. “But on the scale, rock must sound [more] Nigerian. He says his friends often play his songs in front of random people, “to see if it will elicit a reaction.” It’s always like that. “When you hear rock music that sounds like it’s from here,” he says, pointing to his heart, “it gets people’s attention.” In 2021, Afrofolk artist Johnny Drille presented a punk rock song on his album Before we fall asleep — a politically satirical rock song in pidgin that involves growling — to a positive reception.

ClayRocksU excels at something similar, fusing the Igbo language and local pidgin folk elements with punk rock. In February 2021, she comes out “Aminewith his band, the Misfits, creating a sort of subgenre: “Afro-rock.” With the song – a feel-good tune sung in Nigerian pidgin and blending punk rock, afrobeats and folk – Okorocha and Co. are also attempting to challenge the negative stereotypes attached to rock music in this part of the world. The singer recalls performances where audience members were shocked to learn that what they were listening to was rock music. “Sometimes people don’t care about gender,” she says. “They just like what they like.” The lyric video for “Amin” has now 12,000 views on YouTubea feat she achieved organically.

“Not bad for a rock artist in a country where nobody listens to rock, huh? she asks.