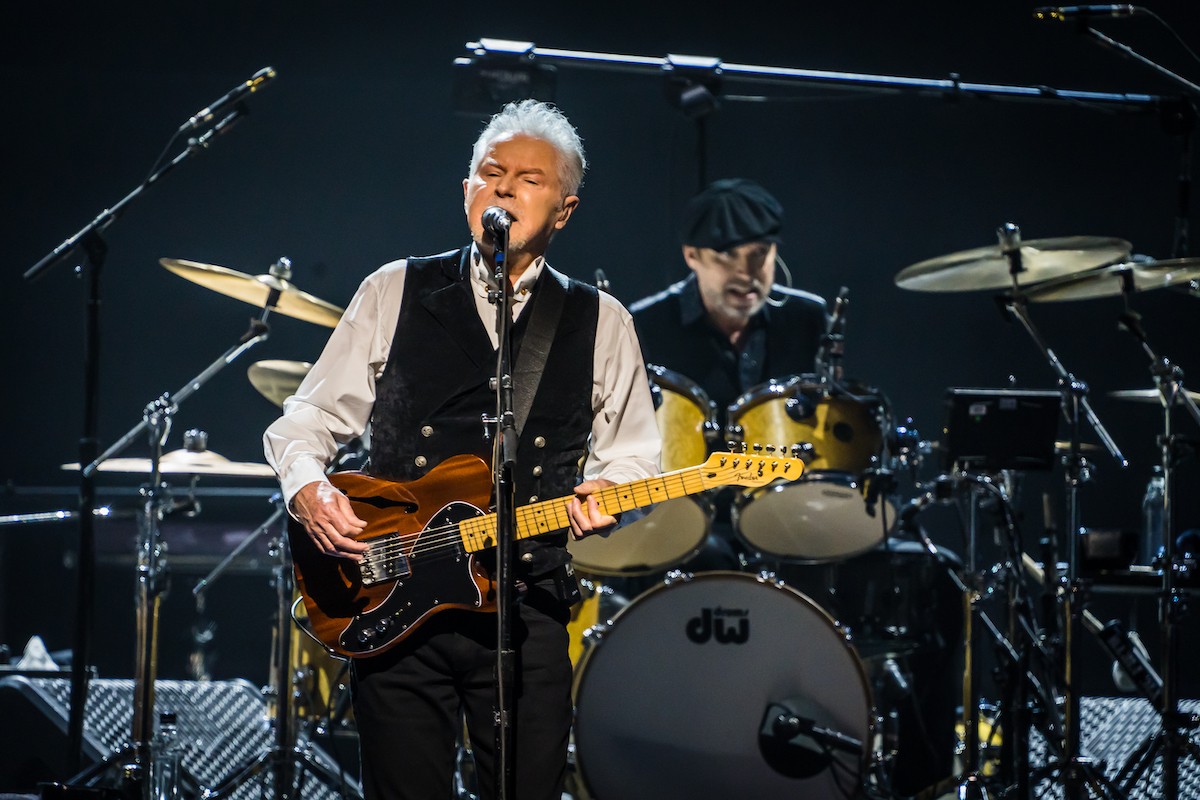 On Monday night, the universe decided to teach stubborn Eagles fans a lesson: If you don’t like Deacon Frey covering for his late father Glenn, you can’t have a Frey onstage at all.

Just before the group’s current step Hotel California tour, it was announced that the new kid in town had an unspecified illness and would be away until further notice. Obviously the show had to go on, but Tampa got to watch a rare Eagles show without anyone in the Frey clan in attendance. That just left sole co-founder Don Henley, shredding wizard Joe Walsh and The long termTimothy B. Schmit, the bassist at the time, plus the weird but cool addition of Vince Gill (yes, that Vince Gill).

At 8:15 p.m., a macabre bellhop slowly strolled onto the stage draped in gray curtains, holding a vinyl copy of Hotel California. He walked over to a record player on the far right of the stage, blew the dust off the record, and put it down. The needle fell and the curtain rose.

Don, Joe and Timothy were all dressed conservatively while performing the band’s best-known album back and forth. Henley, dressed in a white button and a Robert Fripp-style black waistcoat, sang a transposed version of the album’s title track behind the drums, which would only occur a few times throughout the show. Don Felder has been absent from the band for two decades now, so Walsh’s duel on that legendary guitar solo was touring guitarist Steuart Smith, who even wielded a double-handled axe. Whether it’s a Felder tribute or a giant middle finger, the alumni still managed to release the solo almost exactly as it appeared on the original album.

Gill did the vocal parts for Frey on “New Kid In Town” and Walsh harmonized with Schmit’s bass during one of the instrumental segments on “Life In The Fast Lane”. No one had the slightest problem watching Henley shine center stage on the album’s regrettable A-side, ‘Wasted Time’, which saw a surprise appearance by an all-local full orchestra, set just behind the group.

A woman in black came on stage to flip the record, upon which the orchestra would immediately launch into “Wasted Time (Reprise)”. He would then leave the stage to let Don and his friends continue doing their thing, until the album came closer, “The Last Resort”, which not only saw the return of the orchestra, but also the appearance of a local choir of 20 musicians. Finally, around 9 p.m., the last note was struck and the crowd lost it.

A 20-minute intermission took place, and as the orchestra members hung out backstage, Don, Joe, Tim, Vince and Steuart launched into a jaw-dropping rendition of Steve Young’s “Seven Bridges Road,” a favorite of the Eagles for several years. Vince Gill did the vocals for Glenn Frey during “Take It Easy,” and whoever took those high harmonies on “One Of These Nights” deserves a big pat on the back. Once the latter was over, Henley, now much less conservatively dressed, finally came to the microphone and spoke. “It’s not that we don’t care what’s going on in the world right now, it’s just that we need a break,” he explained. “Makes a guy want to drink.”

The rest of the set was nothing but the greatest wall-to-wall hits that fans at the sold-out Amalie Arena paid over $120 to hear. Schmit fueled Glenn’s vocals during “Peaceful Easy Feeling”, Henley returned to Phil Collins mode (vocals and drums) on a slightly slowed down “Witchy Woman” and Gill carried “Take It To The Limit”. Nothing against Joe Walsh, but this live version was infinitely better than when Joe sang it as the opening act for Tom Petty and the Heartbreakers in the same building five years before.

Come to think of it, Joe could have been the star of the show. He very generously gave us a healthy mix of his own Eagles songs (“In The City”, “Pretty Maids All In A Row”), as well as a few tracks from him outside of the Eagles. He greeted the James Gang with “Funk #49”, and during the band’s encore “Heartache Tonight”, the obligatory “Rocky Mountain Way”, talkbox and all, and God love him, but does anyone one figured out what he was saying during his pre-“Life’s Been Good” jokes?

During this encore, Joe wasn’t the only one looking solo. Believe it or not, Henley actually dusted off “Boys Of Summer,” written with Heartbreakers Benmont Tench and Mike Campbell, the latter of whom is in town for a show next week. The other two played were ‘Desperado’, which saw the orchestra return, and the closing was ‘The Best of My Love’, which may have sounded a little closer to ‘Desperado’, but we got when even gave the lingering feeling that the Eagles were saying goodbye. “In case we don’t pass by again, I want to thank you all for a wonderful ride, for 50 wonderful years.” Henley explained.

But then again, how many farewell tours did the guys do?