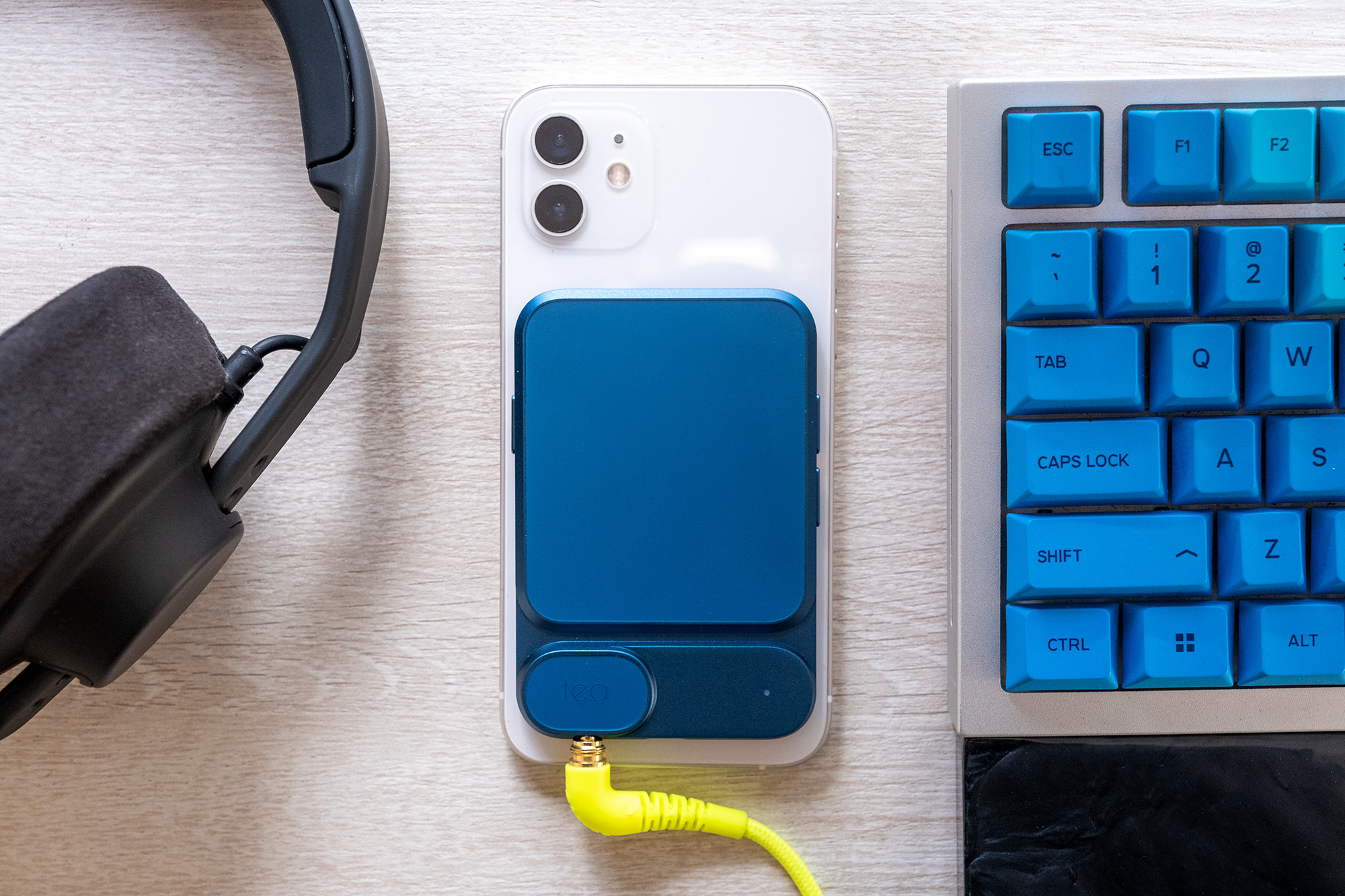 This MagSafe DAC makes so much sense

As more and more music streaming services introduce lossless or high-definition audio into their offerings, interest in DACs (digital-to-analog converters or “headphone amplifiers”) has accelerated – so much so that we created this guide. What was once the preserve of audiophiles is slowly becoming a go-to gadget for those who want more than their phone and AirPods can deliver. But they are not without caveats. For one thing, they’re often expensive, and sometimes they’re not much smaller than the phone you’re attaching them to. Enter the DAC tea by Khadas.

Khadas started out making media-capable single-board computers (SBCs – think…media-specific Raspberry Pi-like things) before moving on to desktop DACs. Tea is the company’s first mobile DAC and it seems to be aimed primarily at iPhone users, although it’s also compatible with Android. The reason I suggest it’s more suitable for Apple phones is that it’s MagSafe compatible. Combine that with the slim, all-metal design of the iPhone and it solves one of the biggest problems with mobile DACs: having something heavy hanging off the back of your phone.

With the tea, it sticks to the back of your phone, and the low profile makes it a bit more visible than Apple’s own MagSafe wallets. You can, of course, find MagSafe compatible cases for Android, but your phone and budget will be a factor.

Beyond the slick form factor, the Tea doesn’t skimp on its codec support. Over USB/Lightning, the Tea can handle audio up to 32-bit/384kHz. Since most mainstream music services don’t offer anything above 192kHz, streamers will be more than covered. Likewise, the Tea can decode MQA (Tidal) as well as DSD, AAC, FLAC, APE, OGG and all standard formats (WAV/MP3 etc.). If you prefer to go wireless, the Tea also supports LDAC and AptX HD via Bluetooth.

Here I should mention that for all its iPhone friendliness, Apple does not offer LDAC or AptX HD support in its flagship phones. You can still use the Bluetooth functionality in Tea, but you won’t be able to take advantage of the higher quality formats. Although that at least means you can charge your phone while using the DAC or walk around with the smaller Tea connected to your headphones rather than your mobile. There are many Android phones that To do supports LDAC/AptX HD, but you’ll need to check the manufacturer’s website to confirm (most Pixels, Samsung flagships, and OnePlus phones offer LDAC/AptX HD decoding).

There are a few things you won’t find here, but most of them are at the high end of audio. For example, there’s only a standard 3.5mm headphone jack – no option for 2.5 or 4.4mm balanced cans at this point (although it’s rumored that a version “Pro” with this might be on the way). There’s also limited feedback on the quality of the codec/audio you’re currently receiving, with just a simple colour-changing LED indicating the format, which you can’t see unless the phone is face down. Inputs are limited to USB-C, so it will work with your phone and PC, but no line-in.

This puts tea in an interesting category. It’s perfectly capable for people who want to get the most out of their streaming service and should even appeal to audiophiles looking for a low-profile option that covers most bases. But at $199, it’s a reasonable expense. Perhaps its most obvious competitor is Fiio’s BTR5. It’s also a portable DAC with Hi-Res Bluetooth support as well as a similar selection of wired formats (also up to 32-bit/384kHz with MQA support). Oh, and the Fiio also offers a balanced headset option (2.5mm). When you factor in that the BTR5 also typically retails for $159, you must really want that slim, MagSafe design.

It’s not to undersell it though. I tested the BTR5 and the Tea side by side, and the convenience of the Tea was evident. With the Fiio, your phone feels tethered, almost weighed down by the DAC. With the tea, it’s similar to using one of those iPhone cases with a battery – a bit thicker, but you can still use the phone as you normally would.

The Tea also has a much larger battery capacity – 1,160mAh compared to the Fiio’s 550mAh. It’s obviously not an audio benefit, but it quickly becomes one if you plan to listen for long periods of time or be away with a charging option for more than a few hours. Which, given the mobile nature of these devices, seems like a reasonable possibility.

I’m not a big fan of the UI though. The tea has three buttons: one on the left and two on the right. The single button works as a power switch or to summon your virtual assistant. The two buttons on the other side control volume or skip tracks. You switch between volume and skip mode by double pressing the power button and the top button on the other side. It works… well, but it’s not very elegant. Plus, if you leave it in skip track mode and go to adjust the volume, you’ll be on the next track before you know it. A minor thing, but frustrating.

In wired mode, the Tea emits a robust, loud and clear sound. It may not be as loud as some other DACs. Even the tiny Firefly gives tea a run for its money there. But, the sound you get is clean and full of gain, and that’s the point here: take a good signal and let it be heard without colorization.

Beyond its primary function as a DAC, it won’t interfere with taking calls either. A pair of mics at the base of the Tea lets you talk without having to fall back on your phone’s mic. Plus, the Tea’s mics are miles better than the iPhone’s, especially when spoken to while it’s resting on the desk. You can also set the tea to recharge through your phone if you run out of juice, or turn it off so it doesn’t tax your handset’s battery if you prefer.

Overall, tea is a welcome addition to a growing category. At $199, it’s not the cheapest for the feature set, but its thoughtful design and aesthetics also make it quite practical and unobtrusive. Unfortunately, if all of this sounds good to you, you’ll have to wait a bit longer. While Khadas is clearly ready for production, the company opts to go the Itinerary Indiegogo, with the campaign due to go live in the coming weeks.

All products recommended by Engadget are selected by our editorial team, independent of our parent company. Some of our stories include affiliate links. If you purchase something through one of these links, we may earn an affiliate commission.